I got pulled away from the car for most of this week as work just went mental and was working all hours over the past 5 days to get on top of things so I could get back to the important job again :)
The build is coming along nicely now and getting to the stage where I need to really forward plan on small silly bits or jobs just cant be completed.
With all the wiring in the dash area out of the way for the IVA it was time to start getting the dash mounted, unlike the leather covered dash the carbon dash has to have bolts secured to the back of the dash as bolting though the dash would look a tad naff even with button heads.
Some strips of stainless was cut for the 4 mounting bolts and then drilled with a 6.5mm hole in the center, the bolts were then put through the flat strips and welded. 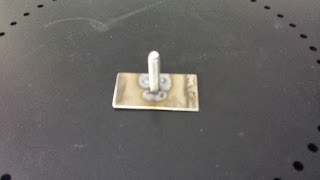 Pic is a bit poor but shows the job, Next was to mix up some fiberfill repair paste and put a blob on the back of the dash. The mounting bolt was then pushed onto it and more paste added to cover the securing bolt. One thing for sure it isnt going to vibrate off. 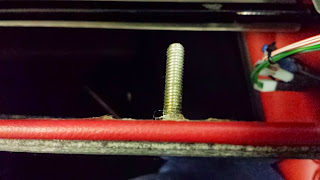 Once the bolts had set a corresponding hole was then marked and drilled in the body. I used some marked paint on the ends of the bolts to mark the dash and drilled the holes. As the dash is presented at an angle due to the bottom lip of the dash the dremmel was then used to elongate the holes down slightly to get the dash to fit snugly into place. 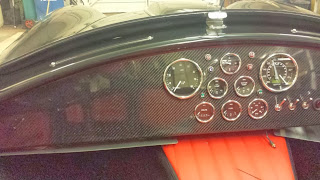 Dash fitting now though the bottom alloy plates have to be sorted to fit properly yet.