Took a notion today to give the body a bit of a clean, after all it was near 2 years from it had a decent clean /buff. I knew about a couple of the gel repairs that i had to do but forgot the smaller ones which take up just as much time. I came across these as I give the shell a quick wash down and decided to give the body a quick Farcela G10 clean up.
On the exterior most of these repairs or pin holes are now sorted but still have a few to do in the engine bay where there were holes that I no longer need due to moving things about to keep a very clean look in the engine bay or as clean as I can given that its a modern engine which a shed load of wires feeding the ECU. 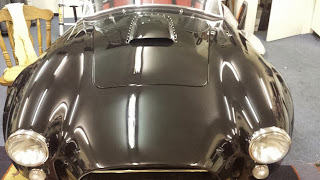 The shell is now looking a bit better again, no doubt it will get dirtier before the build is complete :)

in no particular order the next job to get started was the wire mesh for the scoop where the oil cooler would live. I still had the piece that was cut out for some reason but this proved handy as a former for shaping the first piece of stainless mesh. Once the mesh was cut and shaped the mesh was set into place and the piece of fiberglass that was used  as the former was put behind the mesh before the G clamp with VERY little pressure and a block of wood clamped it at one side. Another clamp and a piece of flat plastic was used to do the same with the other side.
The next step hopefully tomorrow evening will be to use a polyurethane sealant and bond the mesh in place. 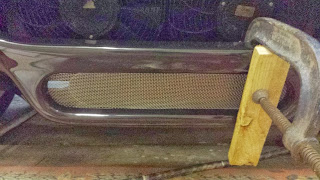