While working on the wheel rubbing on the inner wing issue. I noticed that there were a few tight spots in the steering. This happened when turning the steering from full lock one way to full lock the other.
Its important that the universal joints are all on the exact same alignment or out in 90 degree angles to each other. They cannot be say 30 deg apart. Mine were spot on so this wasn't the issue.
Upon close inspection it was found that the middle Universal Joint was catching on itself while turning. 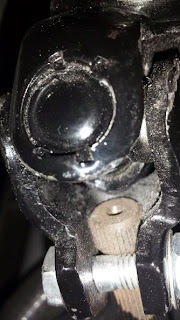 In the above picture you can see the 2 back edges are touching and rubbing, this also happens when the steering was turned another 180 deg etc. It turns out the Universal joint had  a few ruff cast edges and needed trimmed back/ 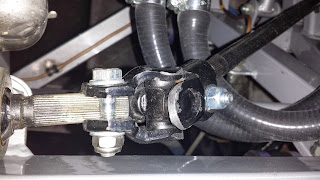 Luckily enough I was able to do this while everything was still in place by using the pencil grinder and just turning the steering round to get at each of the 4 faces. Job now done and painted, the steering turning properly. On to the next job now :)
Posted by Cobra Rob at 10:12