I started of the day by making a small list of some bits I needed and then finished in the boot for now. I need to sand and buff the back of the car again as there is a few wee scrapes and much easier before I fit the roll hoops again.
Anyways the inside of the car had been neglected so far with pretty much nothing done, first the floor got painted just to tidy it up, I know its covered with carpet but it looks better for now. 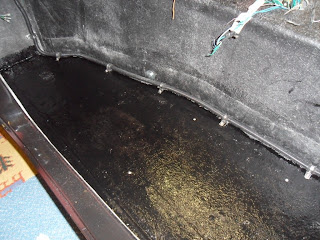 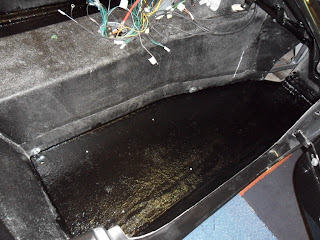 With that done one of the door cards was tackled next it wasnt that hard with the clips in the door cards to transpose the marks onto the door for drilling the 7mm locator holes. 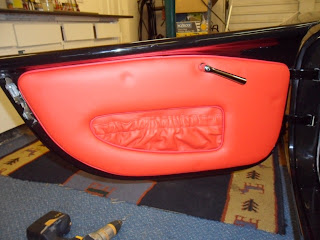 Looks pretty good and makes the car look a little further on.
Next I started to look at the side carpets etc then realised the ridge around the door needed trimmed back to 12mm ,grrrrrrrrrrrrr I thought I had all the dusty fiberglass cutting jobs done, anyways I marked a line right around both doors with the scriber and cut and sanded the lip to 12mm.
Onto the Centre carpet I got it out to see what way it fitted and tried to figure out what way to put it down and also mark where to cut it for the gear lever.
I ordered eschusions from GD as well to tidy up the opening in the body for the door hindges, these come flat and laser cut, part of them needs bent 90 deg before fitting. 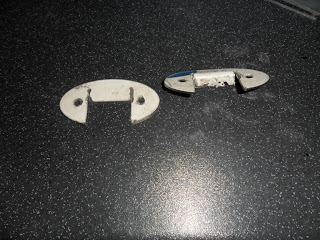 Once the 4 eschusons were bent the tape was peeled of them and give them a quick polish before fitting to the passenger side. Drivers side will get done at a later date.
Posted by Cobra Rob at 15:09