heater and dash under trays

Time for a wee update though not a lot of progress that can been seen really. As I started working on the wiring and metering out wires etc. I realised that i needed to really get the heater ducting and lower vents finished in order to see what space I had where for cables and other things. To do this I needed to get the under trays fitted.
The under trays need set into place then held at the front with clamps whilst the back is marked then drilled through and on up into the steering column support bar in a few places, then tapped. The right and left trays need this done, the center one has holes in the 2 supports already and just the tray needs drilled.
The fronts of the trays that fit either side will get held in place with the dash lip as it has to be bolted underneath. 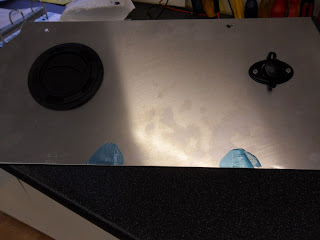 With the rear mounting holes done, The 76mm hole was cut with the holesaw for the adjustable heater duct and also a 12v power socket was added as well, This was done for both the passenger and the drivers side. 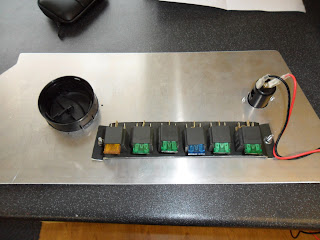 On the passenger side I also added a bank of relays as I needed extra on the car that wasnt covered by the GD loom. I need 1 for the fuel pump, 1 for firing the 2nd cooling fan as I'm using 2 stage cooling from the GM ECU, 2 more relays are required for the heaters in the drivers and passenger seats. I also need one more for part of the alarm system. The last one at the moment is spare, it will either stay a spare or its always there just encase or an emergency if required to swop with another. 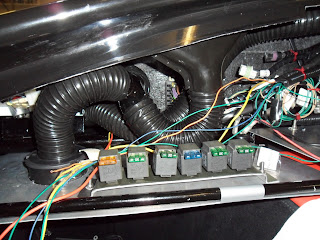 Not loads of room with all the heater hoses on the passenger side along with the wiper motor. 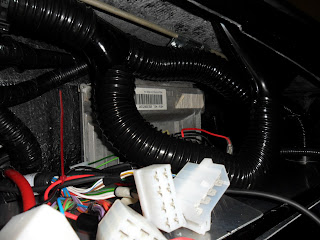 Above pic shows the T piece which splits the air to the demist on the dash and also the lower hot ait vent. next hmmmmmm more wiring in the dash area :)
Posted by Cobra Rob at 13:48